Today marks not only Alissa’s first birthday, but the day we leave for possibly our last trip to Flagstaff for a very long time. My folks are planning to move out of town later this year, probably on the “earlier is better” timeline. After some careful assessment, they decided that they needed to re-evaluate their lives and bring some balance back to the things that they claimed were priorities (God, Family) and those that actually dominated the title (Work, Work, oh, and Work). I am happy for them, even if I’m not exactly thrilled about the likely location of their new home (while they were debating a move to Colorado, this option now seems less likely than a few weeks ago).

As we sat at the airport awaiting our flight, we watched a man literally miss his flight by a hair. He ran up to the gate, asking, “am I too late?” as he watched the jetway pull away from the door to the aircraft. I would have preferred to miss it by a mile. I felt bad for the guy and was thankful for leaving early, as if I would have left at my planned time, I would have been in his shoes.

Our arrival in Phoenix was greeted with scathing hot weather in Phoenix, reminding me once again why I hate the desert and the Valley of the Sun. Poetically, as the mercury rose to 115, the a/c in my parents’ car died. The drive home was hot and miserable as I witnessed a slew of new development that seems to have literally grown from the desert floor since my last visit a mere two months ago.

It’s weird – it’s like my family has completely outgrown the place I grew up. It really isn’t the same place that it once was. The traffic corrections that have been hoped for for the past 20 years are finally completed. The mall is no longer a collection of random stores that open and close on a quarterly basis, but home to many of the same chains that dominate your average urban mall. The homes in the “ghetto ‘hood” that I went to school in are now selling for upwards of a quarter of a million dollars. It isn’t the same town where the kids you went to school with were also the kids you went to church with; nor is it the town that pretty much everyone’s mom has babysat you at some point in your life and vice-versa.

This weekend is also the freaky tri-school reunion, which I originally had every intention of attending, but opted out when I decided that the evening wasn’t worth the $90 price tag. Maybe I’ll attend in another 10 – we’ll see. In 10 more years, I can probably beam myself there anyway.

I did bring along our work mascot – Mad Monkey, who is really a gorilla – for some fun and games. For the record, it was suggested by one of my coworkers, so if I get busted for letting him lead me astray again (the gluing of the cookies to the monitor of another coworker was his idea), it’s on! With that, I will leave you with a shot of Mad Monkey on our fine flight on Frontier airlines, as we arrived in Phoenix. 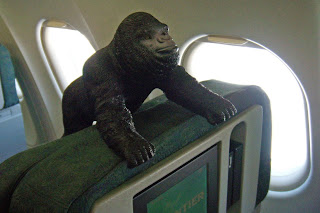